Occupy AT- I'm Such an Awesome Protester

I'm such an awesome protester, it's not even funny, but the rest of this story is absolutely hilarious. The AT runs right through Hanover, NH. The town is home to Dartmouth University, of Animal House fame. They're also a feeder school for pricks going into Wall Street and all those "evil American corporations." So, naturally, they have an "Occupy Dartmouth" Movement...right on the AT...I couldn't resist. The lightbulb went off in a coffee shop across the street:

Socialite: "Are you hiking the AT?"

Rich: "Absolutely, I'm freezing every night, but I'll figure it out eventually."

Socialite: "Did you see our campers across the street?"

Rich: "HAHAHA, yeah, I should camp out with them, huh?"

Bingo. Game on! From there, I crossed the street, walked up, and said, "Hey, Can I join your movement for the night?" It gets better. But, before I continue, you have to know something about me: I share about as many ideals with this movement as Ron Paul shares with Fidel Castro. If I were a character on 30 Rock, I'd be Jack Donaghy. If I were a character on Parks and Recreation, I'd be Ron Swanson. These character comparisons have been verified by my closest friends to be accurate. But, I'm a smooooth (some say slimy) operator, I can play any side of a debate, and I know a lot of these issues like the back of my hand...at least compared to trust-funded undergrads....and that's what I was in the middle of now. I had no fear. So I took a seat. The Occupy Dartmouth movement wasn't well organized. Later, when the organizers came back from an "Organizers Conference" in Boston, I asked them what their take-aways were, what they were going to implement here in Dartmouth that they learned at the Boston Conference. Their response was saddening, but probably sums up what this movement is all about: "Nothing, I mean, we might put up another tent." OMG...Seriously? It all makes perfect sense. I mean, if Jack Donaghy went to that conference, he would have come back with literature to pass out, an action plan, and to my query would have responded, "We're building a 10 story 'Movement Education Center' on the corner, of course we'll have to tear down the alumni hall, but, that won't be a problem, I already negotiated the necessary permits." I at least expected them to have some sort of plan after going to a full blown conference! But, their tent was nice. It was a converted EZ-Up, winterized with insulation, space heaters, and blow up air matresses. It reminded me of a Bedouin tent, minus the sand. In my head I started singing the rap song "First World Problemz." It's on YouTube, watch it. So, I'm sitting there, people leave to go get dinner, and it's me and a High School senior. I look around, decide the place needs a facelift, and start sprucing up. I basically did what equates to what you do before you have guest over at your house. Throwing out trash, arranging chairs so people can actually sit in them, and generally making the place look what I would call "Marginally Presentable."  Instead of organizing Maxims, Popular Mechanics, and editions of the Wall Street Journal, it was various pieces of movement specific propaganda, but same concept. I moved signs so they could be seen from the intersection. I set up a propaganda table for people to peruse. 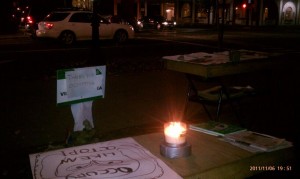 Immediately, people started saying things like, "This place looks organized" and "Nice Camp." Propaganda was now being distributed, something that apparently hadn't happened up until this point. Then the High School kid left, presumably to do some homework, or clean his room or something. At this juncture, I was the sole person Occupying Dartmouth. WTF. Weak. I was actually the sole occupier for several hours. While holding down the fort, I talked to a bunch of passer-by's. Mostly about my trip up the trail, or time in the Navy, but never about the movement. Still, to this point, I have no idea what it's actually about. Most people don't actually. It's part of the charm. Then I developed the Occupy AT initiative:

I think these demands are reasonable, and would be  a boon for the trail. The Evil ATC and AMC is the only thing standing in our way to a better trail.

The next morning, I woke up after a warm night in the Bedouin-American tent, wrote this post, and occupied a little while I was waiting for a friend to meet me for breakfast. I was the first one out of the tent and the only one sitting outside. Eventually, I was joined by another student. We chatted more about the trail and he commented on how good the camp looked.

A woman walked by and exclaimed, "Oh, awesome, I've been waiting for information on this thing!" I can't make this up. 4 week occupation and she was waiting for me to simply put out the stuff they had laying around on a table.

For the next several minutes, she looked through the propaganda, picking some things up, putting them back down, but didn't take anything. Table full of mission statements, declarations, etc.  Then she came over to talk to us.

"So what is this movement about?" Good question lady, I've been here all night and I still can't figure that one out.

I looked to my compatriot, and he began to explain in a very circuitous way that they don't have any stance, ideals, or goals. If you've ever been involved in Model United Nations (MUN), you've seen this before. It usually happens when a Type A personality gets assigned some jackwagon country like DR Congo in the UNHCR (United Nations High Commission on Refugees). Or, worse, the Type A gets a country like Mexico that neither has any problems anyone cares about and doesn't really care about anyone else. The Type A runs the committee and creates resolutions from the standpoint of, well, nothing. In very eloquent and pedantic terms, the Type A lays out exactly that, that "we the Congo don't have a refugee problem" or "Mexico doesn't believe that the situation warrants dos mierdas." In both cases, you wind up listening to this dross for hours and writing resolutions that amount to nothing. It's actually a really good model for the real UN. It's also great if you like hearing yourself talk. I actually signed up for DR Congo in the UNHCR once just to see what would happen. I actually got Sweden to sign my resolution, and yes, she was a hot blonde.

It was like watching a trainwreck. Fortunately my friend showed up for breakfast, snapped a photo, and we were off to Lou's...a very good breakfast place if you're ever near Dartmouth.

I guess you can lead a horse to water, but in Hanover, It's more likely to wind up dead in the ROTC Commander's office.