How I Found Social Pool- the Hidden Pool of the Mojave

The Social Pool Work of Art 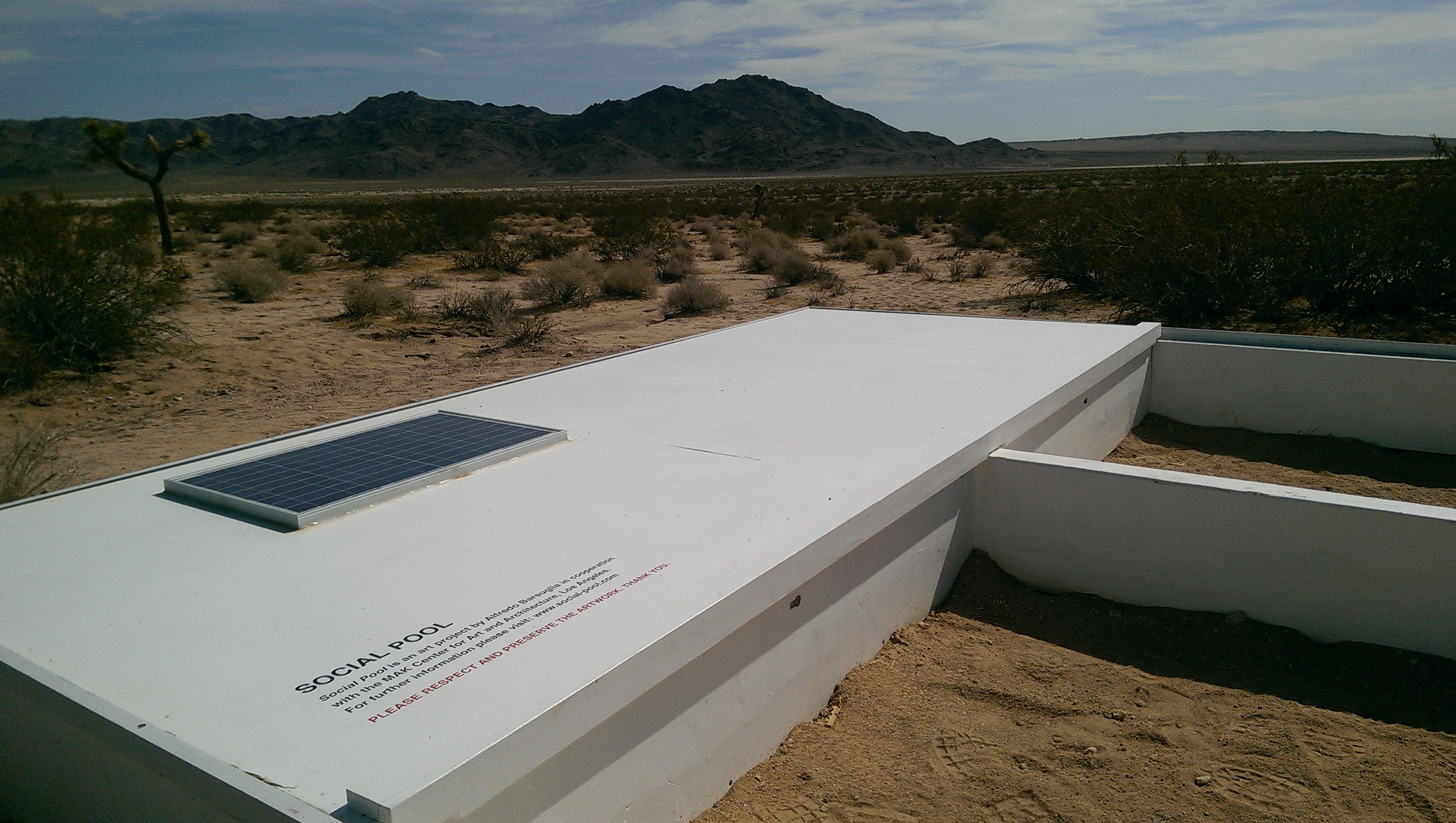 Looking out over the stark pool into the desert.

Sometime in June I came across an article about a hidden pool in the Mojave Desert. I have been lusting for an adventure for some time, so the thought of a secret and secluded pool in the middle of the desert instantly caught my attention. The place is known as social pool.

Social Pool is the work of artist Alfredo Barsuglia. It's a small pool built in the middle of the desert that symbolizes a bunch of stuff I don't claim to understand sober. It's almost self sufficient. A solar panel keeps the filter running intermittently and visitors need only bring a few gallons of water to keep the level up. I was attracted to the remoteness, I was attracted to the beauty of the desert, but I was mostly drawn to the challenge of finding it. The artist says "It's really hard to find." That was the challenge I needed. I began devising schemes to find it that didn't involve venturing to WeHo's MAK Center and simply asking. I wanted to hunt it.

I looked into matching the mountains in the background of the pictures with terrain. All the desert looks the same. I looked at shadows to determine orientation and tried to calculate lat/lon based on time and length of shadows. All of that is really hard. I would be proud had it worked. In the end, it was people that leaked the location. It's ironic that the whole social contract of secrecy was broken so quickly and unknowingly by those who were the pools biggest champions. I felt bad that I hadn't solved the problem like a rocket scientist, but I'll take what I can get. 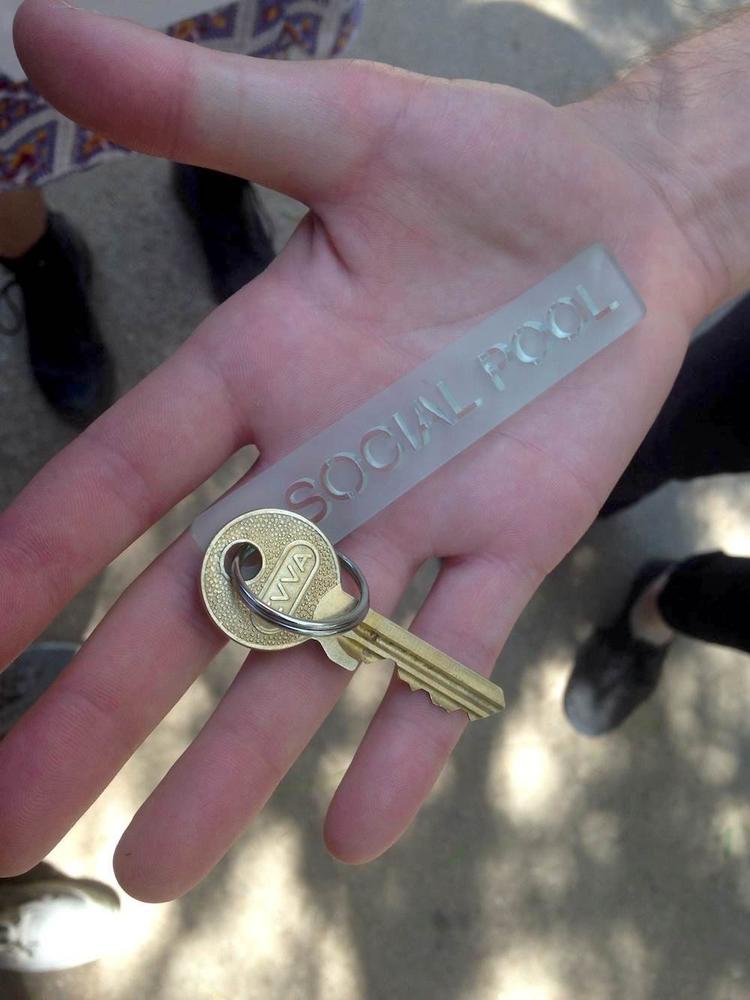 My first break came when LAist blogger Juliet Bennett Rylah posted a picture of the key. Keys are more like passwords than anything else. Most locks are pin and tumbler based. There's a finite number of pins, and they each have a different height. Based on the picture of the key, the lock is a 5 pin Evva. So, if you can decode the pin heights from a picture, you can just order a key from a locksmith based on the code. You just say you want an EV-7D or whatever, cut to A12345. Then you have a key.

So the key was taken care of, but I had no coordinates. I started collecting images from Google to try to match the terrain and try my shadow hocus-pocus. I used image search to find visually similar images hoping someone took a picture of the same mountain and named it. I scanned the picture's meta-data to get time/date for my shadow calculations. I didn't figure someone would be careless enough to Geo-Tag the pictures. 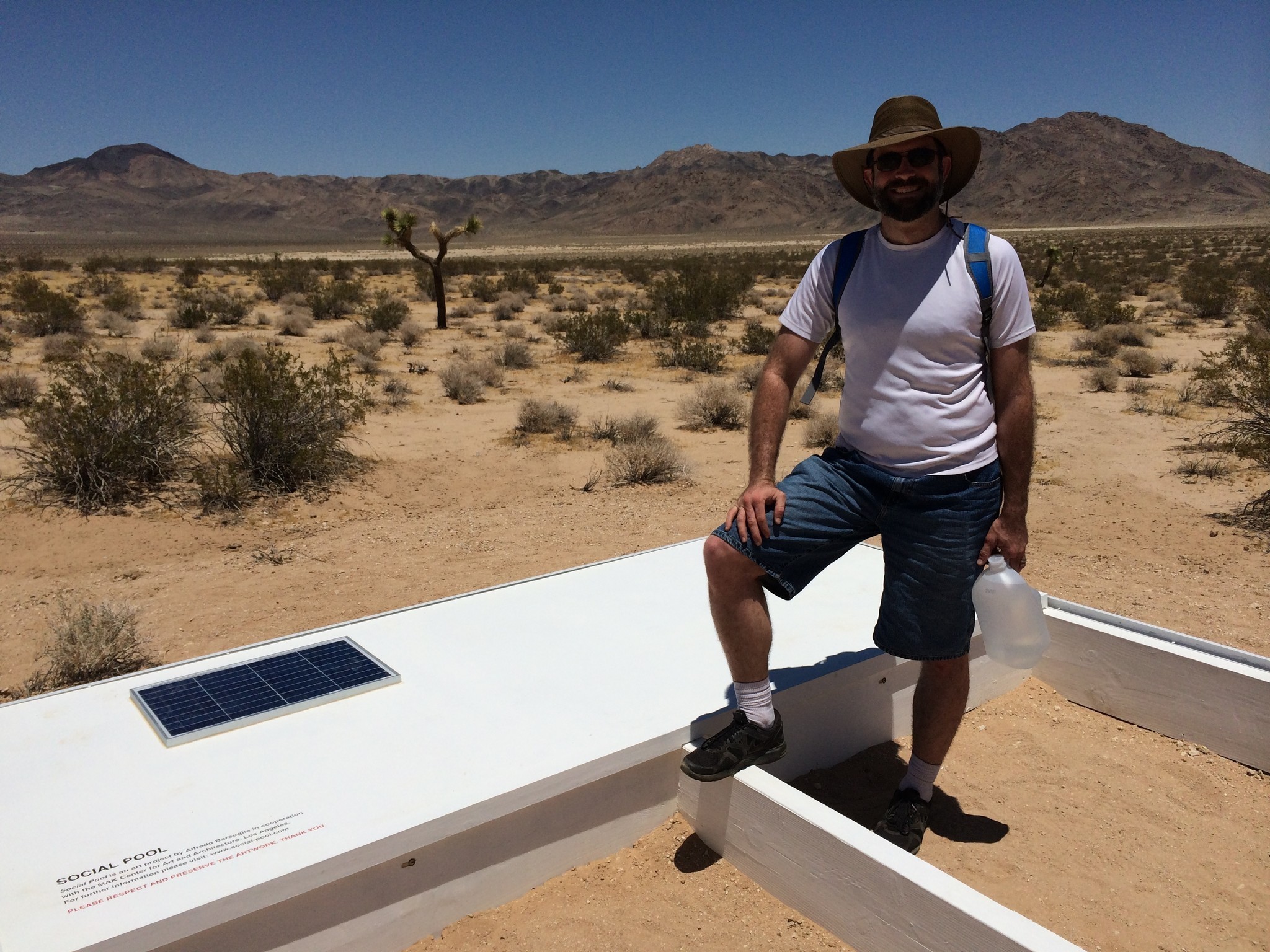 Thank you Lukas Mandrake and your iPhone 5s. I saw the iPhone 5s tag and got excited. Smartphones are the death of privacy. Sure enough, full EXIF meta-data with Lat/Lon, elevation, fStop, focal length, exposure...you name it. The altitude of 900 threw me off, but then I converted to feet and it was spot on. I don't know if Lukas, a scientist at JPL, wouldn't have made this mistake, but I do know you should be careful with units around JPL. I was stoked, I had my coordinates. I put them into Google Earth and verified that the terrain matched the pictures. I convinced myself they did. I also verified that it was a reasonable distance from the company that built the pool. Then I searched tax records and found Alfredo recently purchased a 10 acre parcel for a cool $2500. The parcel descriptions are exceptionally difficult to match to an actual plot of land, however, my family has a similar piece of dirt in the middle of nowhere, so I had experience reading the arcane assessor documents. I probably should have just started my search there, I would have saved a lot of time.

Getting to the Pool

I wanted to make more than a day of it. I loaded up my camping gear, roped a friend into the shenanigans and headed off to the desert. I also took extra snacks and 5 gallons of water to pay the piper. After all, I was crashing the party, so to speak. I thought I might even have to pay off legitimate visitors with cold beer. Horrendous traffic leaving the southland made the trip take 3 instead of 2 hours. Our ETA wound up being around 8:30pm, just after dark. We booked it down marked and unmarked roads, following a track I had laid out in Google Earth. I had found a dirt road via the satellite imagery that passed very close to the pool.  I overshot the coordinates on the road by about 20 feet, so I backed up and activated the pool waypoint. Only 120 feet away. Headlamp on, "Joe, it's like right there....wait, there it is!" 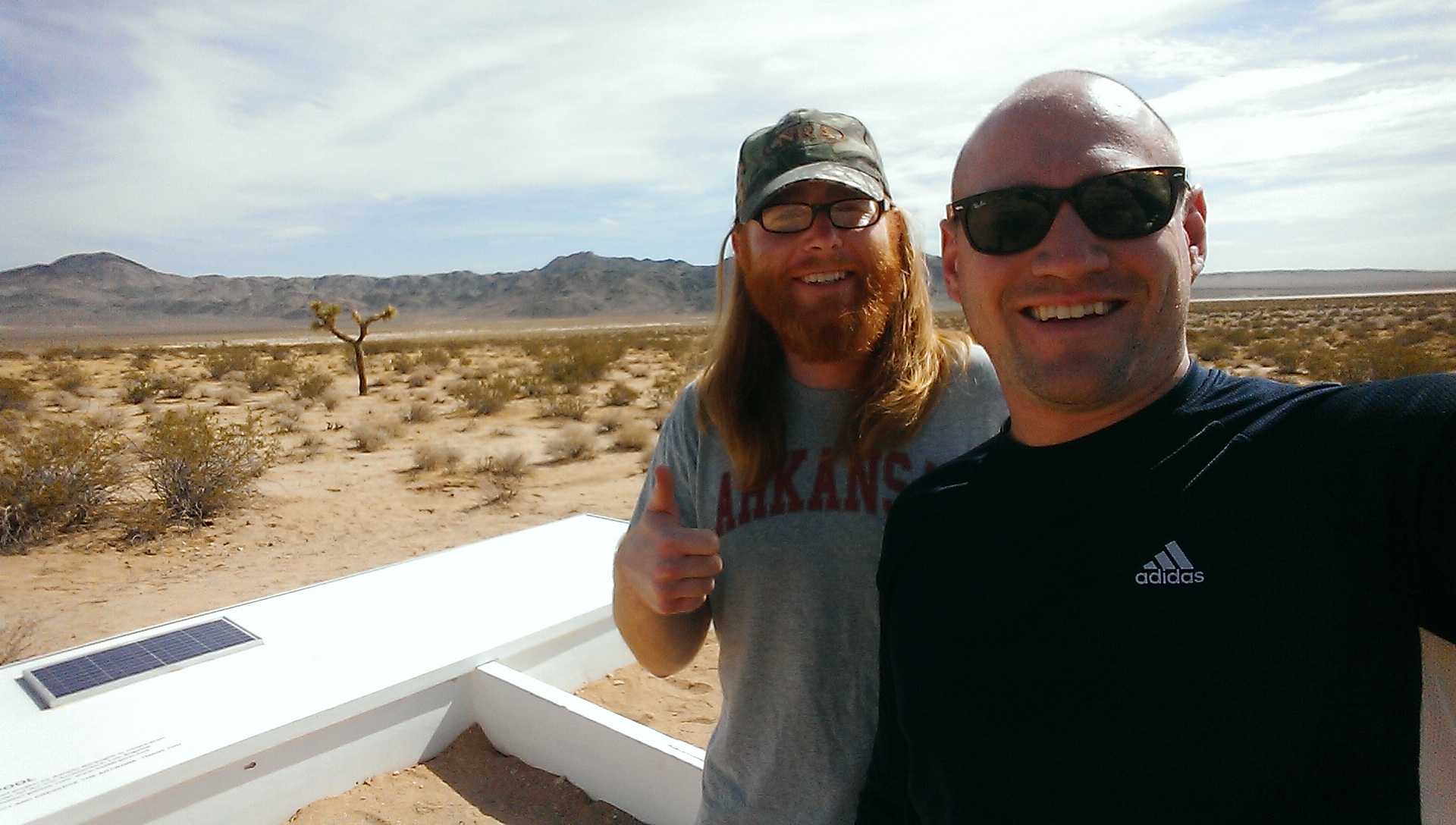 When I said that, lights came on. Some group was camped out there hiding in the dark. We probably scared the shit out of them. Here we come, trucking through the desert in the dark. We blow by within 120', hit the brakes, back up, get out, and walk straight towards them. They were probably hearing banjo music and trying to figure out who ran the slowest. After a brief and awkward conversation, we took off and camped clear out of their way. Obviously, the encounter wasn't very social. I was bummed we weren't in the pool, but as a consolation, I saw a bunch of meteors, the Milky Way Galaxy, and for the first time in my life, albeit inebriated, I put together the entirety of the Scorpio constellation. It was a moment.

Luxury in the Desert 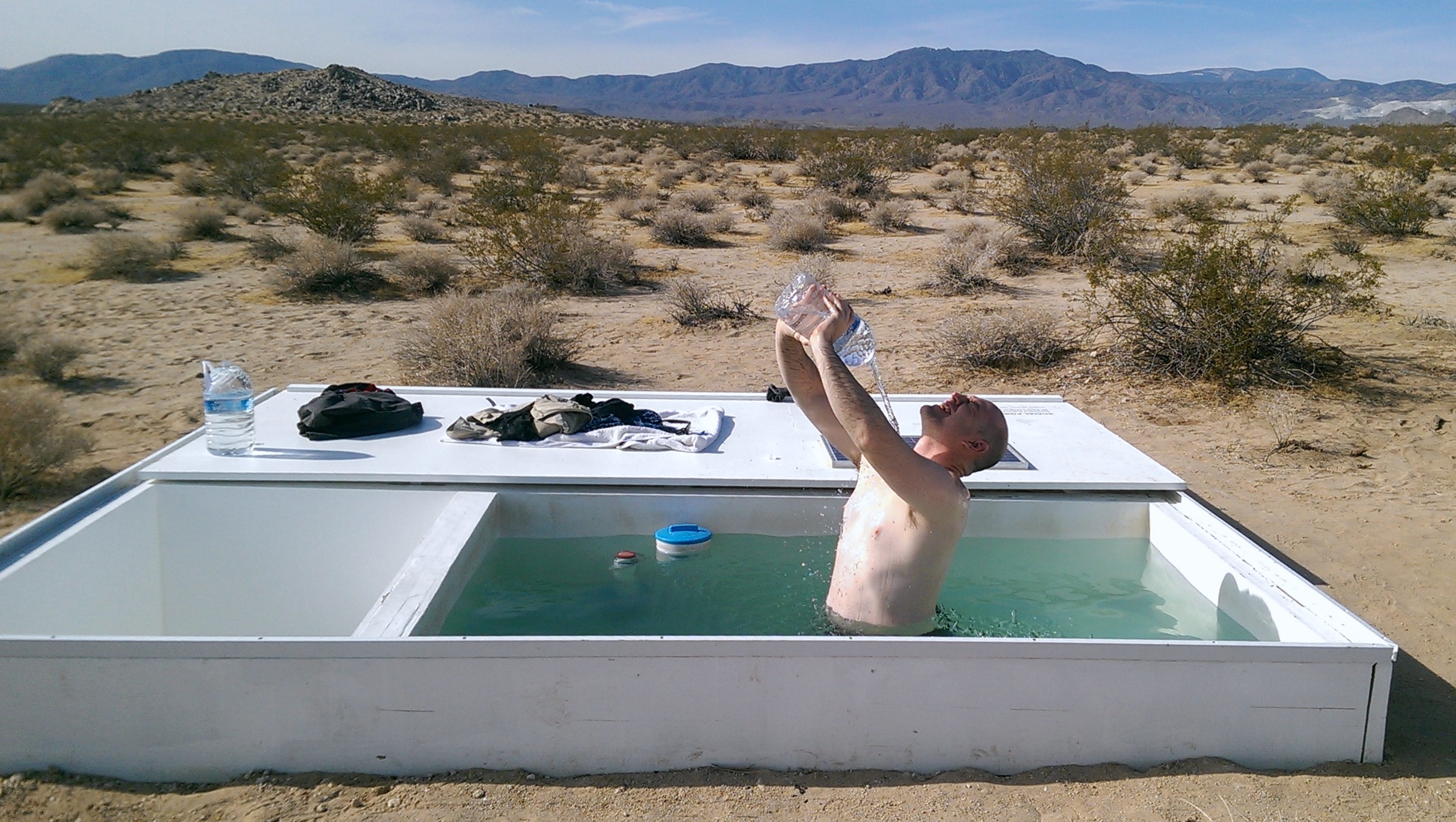 The chlorine is pretty heavy, so I made my water contribution count.

The next morning, we waited for the group to leave and descended on the pool. That sucker was ICE cold and refreshing...like a York Peppermint Pattie. The temperature had already begun to rise by 9am and the pool was just as it promised- relaxing and peaceful. It's pretty nice to sit in a cool bath with the baking desert all around. There was a camp/junk pile about a 1/4 mile away, but, when you sit in the pool, it disappears. For all intents and purposes, it's just you, the sun, the wind, and the view of the landscape. While the pool will keep you cool, the sun still beats down, and after an hour, I was ready to get on the road. By the early morning, it was already 90, with temperatures predicted to go over 100. We dropped our water in to replenish the oasis, picked up some trash, wiped down the muddy cover, and took our selfies. We drove away from this secret spot in the middle of nowhere, leaving it to stand silently hidden in the desert. 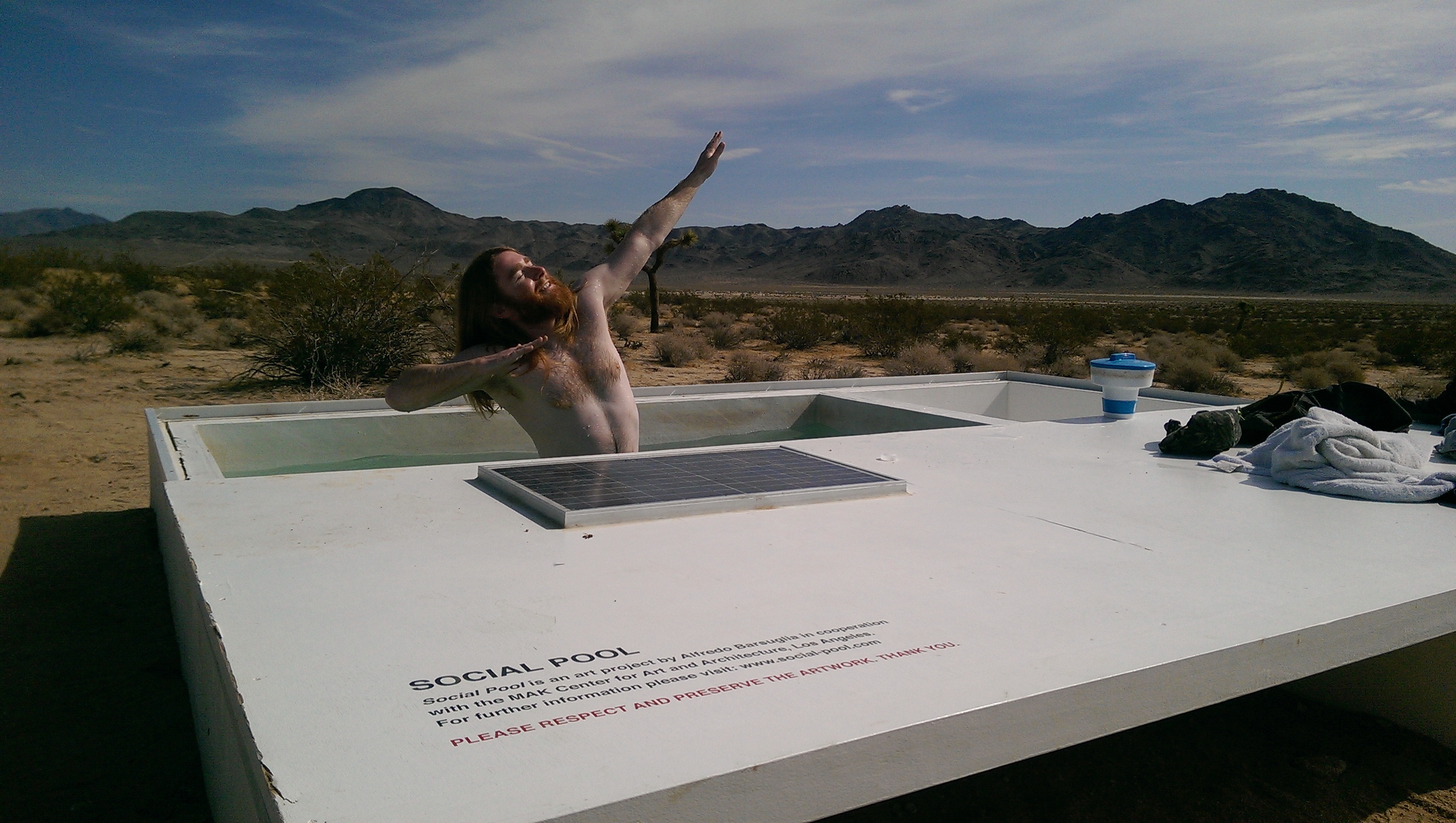 Be a responsible hero!

Having spent a lot of time in the wild, I can appreciate luxury in the outdoors. There's nothing like backpacking for weeks to find a beautiful and secluded feature. What makes me want it is when I know access is limited. Only those willing to put in some effort get to enjoy it. Social Pool is like the top of Mt. Everest, a hidden waterfall, or a swimming hole- even though you can drive to it, its secrecy keeps it valuable.  Adventurers love exclusivity, and that's more and more rare these days.  We adventure to gain exclusive access instead of buying it. The common thread you see when you're outdoors a lot is a lot of people don't take care of the wilderness. Leave No Trace has become a common mantra, but people leave traces all the time. It's not done maliciously, but most often unknowingly. I don't think any of those visitors meant to reveal the location, but they did. I don't think that people litter out there, but if you let your trash blow away and you don't chase it, you just left a trace.  Wear sunscreen in the pool, leave a film. Don't dust your feet off before jumping in, leave sand in the bottom. It's the little things that compound and leave a bigger impact. So, here's my advice. 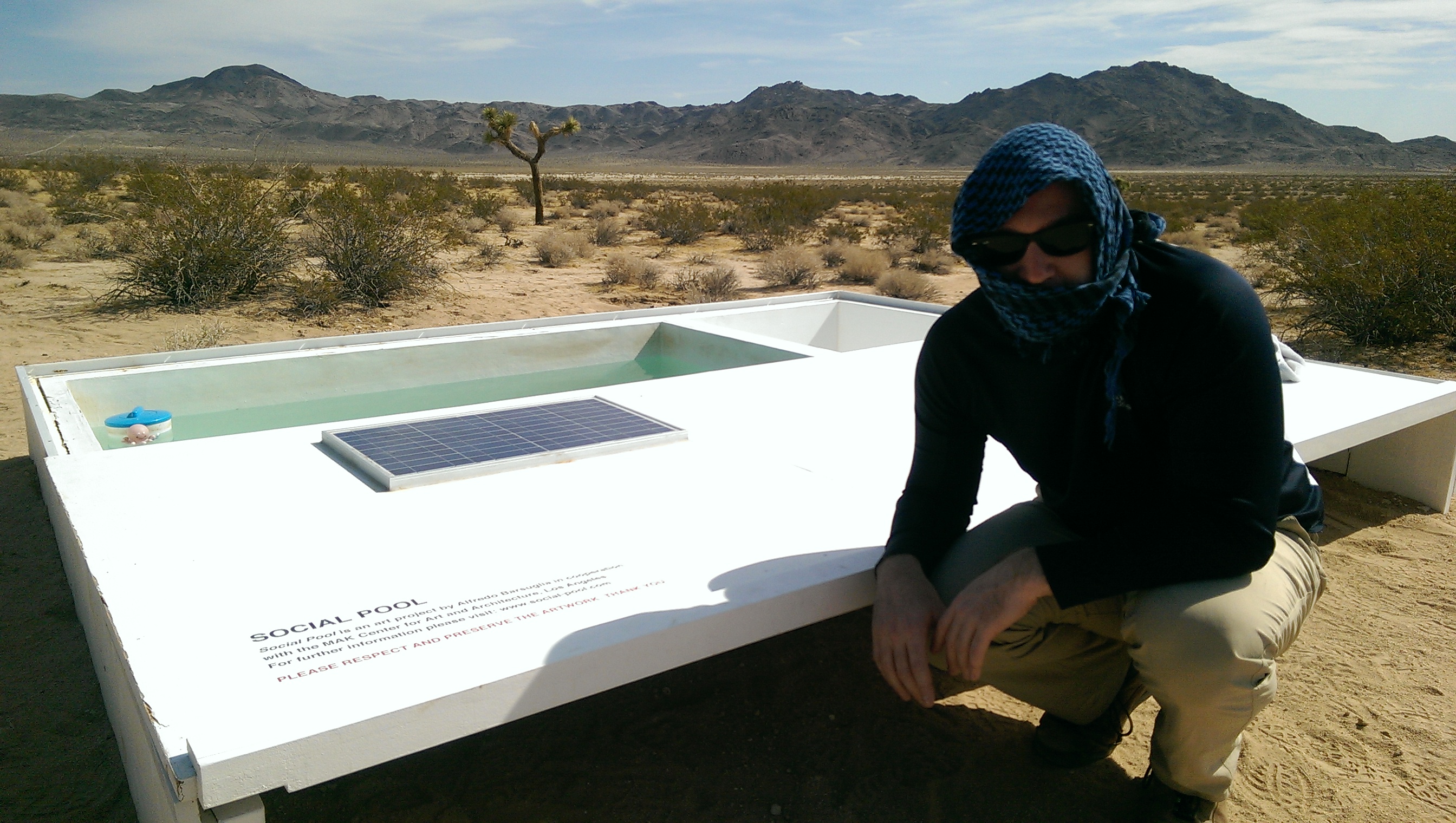 The sun is incredibly hot. Cover up! The key is due back in LA at 11am. If you're planning on crashing the party, shoot to arrive after 9am and before 1pm to avoid bothering legitimate visitors. Or, alternately, make social-pool a truly social thing and crash it like an asshole and see what happens.

Since our visit to the pool, I've casually kept up with what's going on with it. Here are some interesting things that I've come across that I think add to the social aspect: