Summiting Katahdin- The "Side Hike" of the Year

Every day on the trail, multiple times a day, I hear the same question: What are you going to do when Baxter closes? My response has always been, "We'll see." The truth is, Baxter never really closes, it just becomes restricted. In any case, when I got to Connecticut where I had left my truck, I decided to take a trip up to Maine to do some scouting.

My Key West to Canada route involves the Florida Trail, Appalachain Trail, and lastly, the International Appalachain Trail. The latter of which diverges from the AT just south of Baxter State Park. Therefore, if I stayed on my intended route, I'd miss Baxter and Mt. Katahdin completely. That just wouldn't do. So, on my trip up to Maine, I decided to "Knock Out" Katahdin and Baxter.

When I arrived Monday night, I stayed at the Appalachain Trail Lodge-- the last hiker hostel on the AT. There, I planned out my route for the following day. I would start at Abol Bridge and hike 10 miles up to the Birches campsite in Baxter, then back down the Blueberry Ledges trail to my truck parked just outside of Baxter. 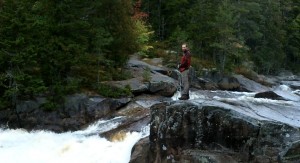 The next day was beautiful. Mild drizzle, easy trail. I was shocked to see how easy Maine was. It was also beautiful. Fall foilage was changing and the forest floor was lush and green. Recent rainfall made everything alive. Except for the bugs...thank god they were all gone for the winter. I met up with several thru-hikers finishing their journey, but departed down the Blueberry Ledges trail to my truck and the hostel. One of the greatest things after months of backpacking, is feeling the weight lifted from your shoulders as you do a 15 mile day hike with a light pack. It makes the miles so much easier.

That night, I contemplated my summit route. I wanted to go up and over, across the Knife's Edge and down the other side of the mountain. To this day, doubling back just isn't as fun as hiking through. After trying to work out every combination of trails, I finally settled on the simple up and back along the Hunt Trail, which is the official AT route up Katahdin. Everthing else would involve a complicated shuttle ride, money, and wasted effort.

Wednesday morning, I woke up early, got a good breakfast, and arrived at Katahdin Streams campground around 10:30. I was advised by the Ranger at the gate that I was late (haven't heard that before) and that it was a Class II day. Class II means they don't recommend hiking above treeline. The forecast was to be 45+ mph winds and possible rain. From the base, it didn't look that bad, so of course, I went for it. 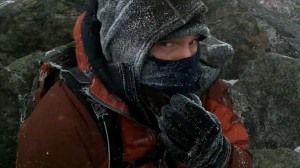 As I made my way up, the mist turned to a drizzle and the wind started blowing. When I reached the treeline, I met a trail maintainer working as an intern. I asked John what it was like up there, and he wasn't too positive. He was actually in the process of turning around because it was blowing so hard. As I pressed on, he asked to join me and we continued up the mountain. John was hiking  Katahdin on his day off. On his working days, he hikes and fixes trails...with a 80 pound pack.

Above the tree line was not recommened that day. Upon reaching that point, I wholeheartedly concurred with the Ranger. Oh well, now I had a buddy as backup. That's also when the snow started blowing sideways. Literally. There was no vertical component to the snowfall. It was all sideways.

Hunched over into the wind, we scrambled across boulders, up rocks and finally made it to the tablelands, a plateau about 600 ft below the summit. Wind here was just as bad, but the walking was easier. This is when the cold really started to hit hard. By a small thermometer, it was about 30 degrees. Plus about a 40 mph wind chill. Frigid is the only word to describe this climate. It was a different planet.  It was awesome!

Not only was it cold and rocky, gravity somehow  shifted.  It was actually the wind, however, combined with all of the other environmental factors, it seemed as if gravity had changed its rules. I hiked sideways, the wind propping me up. When I jumped across rocks, I'd often travel much farther than anticipated...or not at all.  The drizzle had morphed to a icy snow mix. It should have been an amazing view, but I could barely see 50 feet ahead. If ahead happened to be in the direction of the wind, then it was 1 foot ahead. 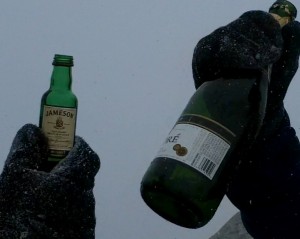 Step by step we made it up. At the top, I quickly layered up to keep warm, busted out the Jameson, and toasted with some random hikers with a bottle of bubbly. After the obligatory pics and videos, John and I started down rather quickly. We passed a handful of hikers on the way up, but many more on the way down. We were cold,  so we booked it.

I  threw on a pair of Yaktraks I intended on destroying and flew across the snowy and icy rocks. John, a professional hiker in these parts, was like a mountain goat down the trail. It probably helped that he was conditioned to carry a 100 pound frame pack with heavy tools whilst wearing steel toe boots. 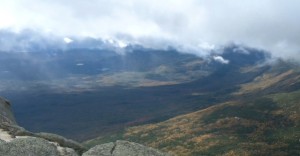 As we descended off the table lands, our first view came into sight. Between the fast moving clouds that were pelting us with rain and sleet, it finally registered that we were on a mountain. It was absolutely breathtaking. The sun shining through the clouds cast shadows on the mountains and reflected off the numerous lakes below. There's nothing that compares to a view seen right after a phenomenally shitty blizzard. It's like the whole earth is opened up to you; all of the sudden your eyes are open and you see clearly. Even though the view was right there the whole time, the revelation the clouds provide is truly the most breathtaking experience I've ever had...well...aside from the arduous, breath-stealing, ascent up.

All said and done, I started at 10:45 and returned at 5:15. Accounting for the time at the summit, the total time was around 6 hours for a 10 mile round trip. A little over 1.5 mph for some pretty tough terrain ain't that bad. When I returned to CT to hike, it put a whole new perspective on the "mountains" that were "challenging" me the week before.  Onward and Northward again! That, my dear friends, was one hell of a side-hike.