There are few things in life worth getting worked up about. There are even fewer that actually need you to be stressed over. Things like a Nuclear Reactor casualty drill or a broached sailboat in the middle of the Atlantic make my personal list of things that should get me stressed. Most things in every day life just require you to chill out. I [...] Read more

Wild hogs are a menace in the south. They chew up crops and are downright dangerous. I had my introduction to them in central Florida when I met a couple hunters that needed help dragging a 200 lbs hog out of the bush. These things are huge! A few hours later I was eating fresh hog meat. A few weeks later I caught a new show on cable called "Hogs [...] Read more

On an ironic note, I made friends with several dogs today as I was getting water as opposed to my normal aggressive approach...turns out there's more than one way to quiet a barking dog. I'm still sticking with my 5 step plan for snapping dogs though. To digress, my thoughts today concern endurance. Unlike R. Kelly, my mind's telling me yes, but [...] Read more

Domestic dogs are a huge annoyance to cyclists and hikers. I have been chased by pit bulls, german shepherds, labs, and even dogs in packs. I’ve never been attacked. Here’s the mindset/method I use to deter them. Before you folks at PETA get bent out of shape, know that this is the same mindset I adopt when a human sprints after me while screaming [...] Read more

Alabama has a different standard for roads. This was obvious the second I passed the “Welcome to Alabama” sign. Things we take for granted like signs, lines, and actual pavement aren’t standard fare. That’s ok though, because there isn’t really that much traffic. So, I’m glad they don’t waste money…but, seriously, it’s like Mexico out here. Here’s [...] Read more 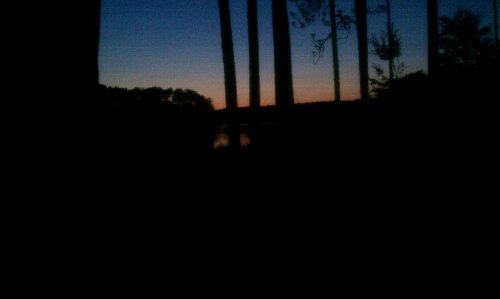 Getting back on the trail felt awesome. The bike performed great. It was such a rush putting pavement behind me at 20 mph as opposed to 3 mph. In a half day, I covered what would have been a miserable 3 days by foot. Sure, my quads burn and it feels like I spent a day with Hans, the bear pawed German proctologist, but the speed is totally worth [...] Read more 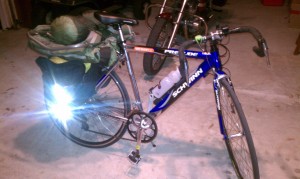 I expected the bicycle I had outfitted for my ride through Alabama to Springer Mountain to arrive in Mobile last Wednesday. When it did not arrive on Thursday, I called Light Street Cycles in Baltimore for the UPS tracking number. After playing phone tag, I finally talked to the owner of Light Street on Saturday. She informed me that the bike was [...] Read more 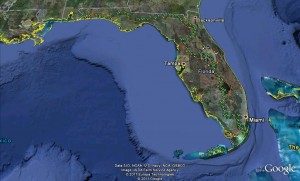 With my trip along the Florida Trail complete, I've collected quite a few check-ins. Each night I checked in with a Spot Satellite Messenger. This device relayed my position to a satellite. From there, family is notified via email and friends are annoyed on facebook with a quick message and a link to my GPS coordinates. The following KML File is a [...] Read more